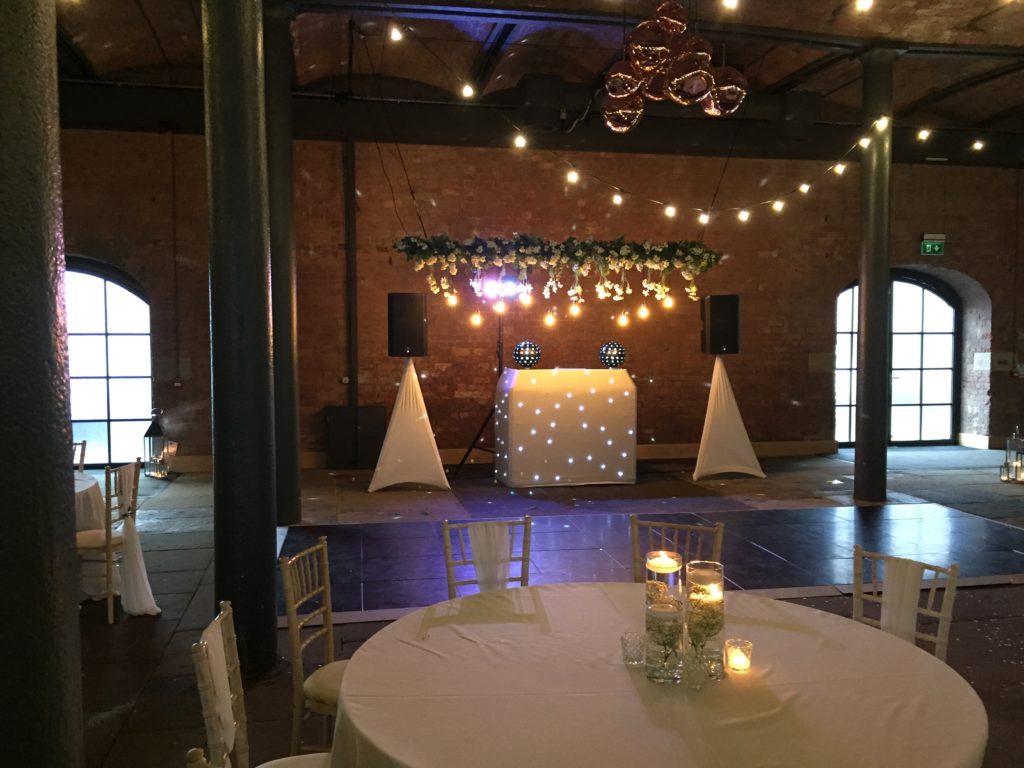 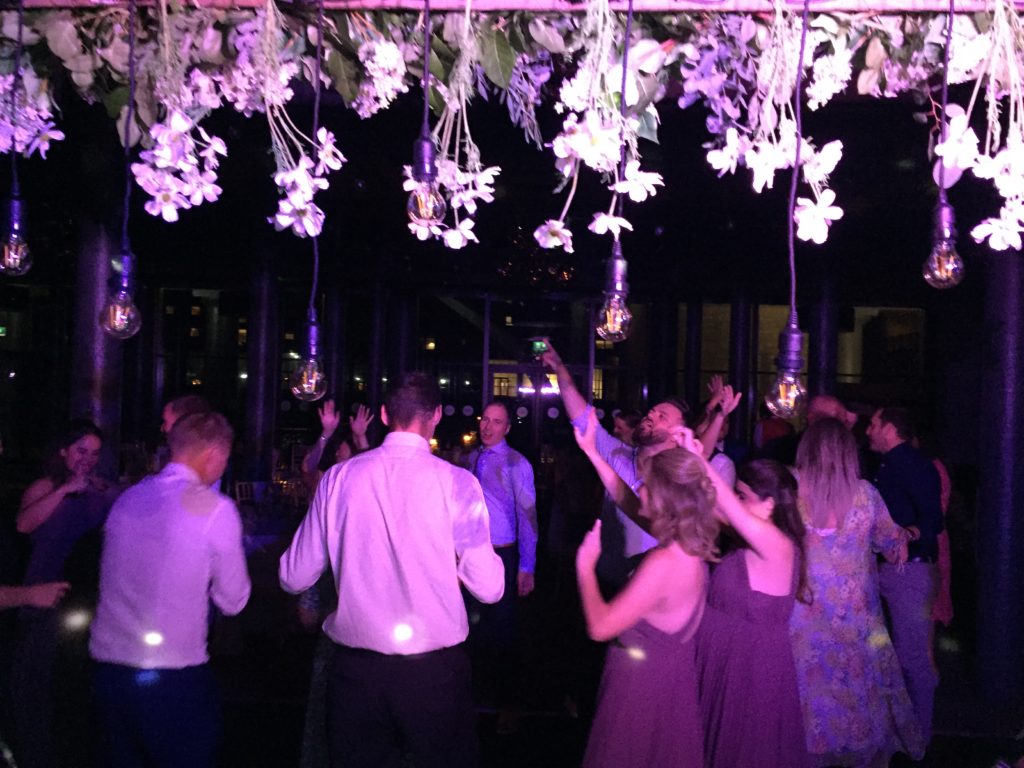 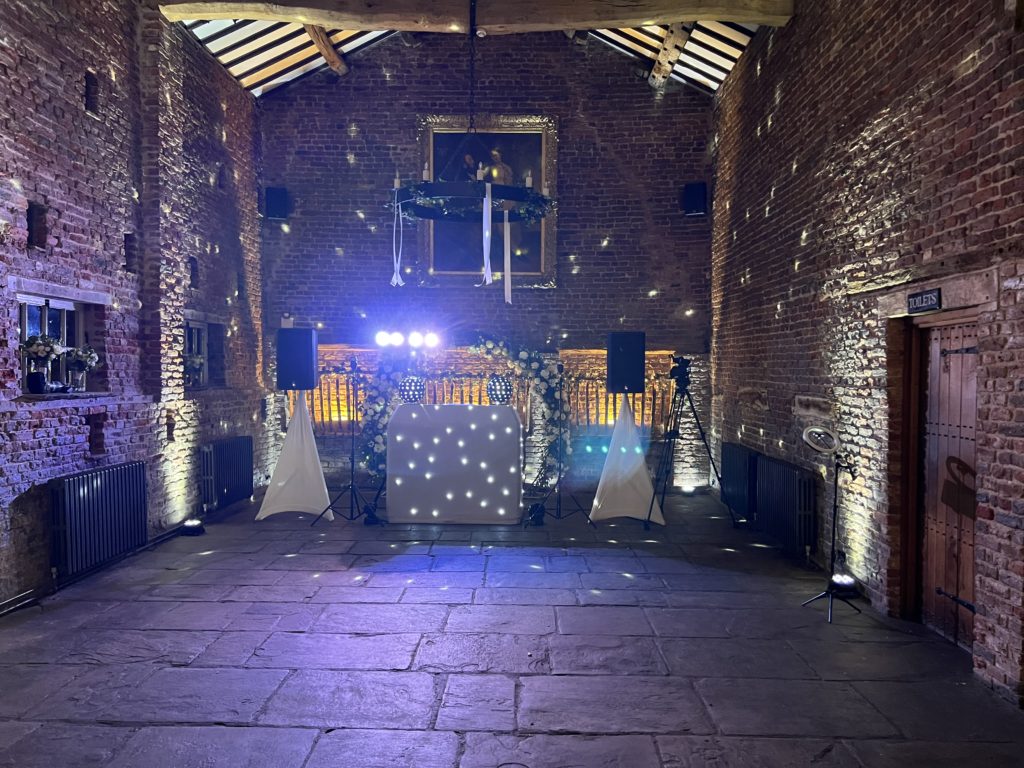 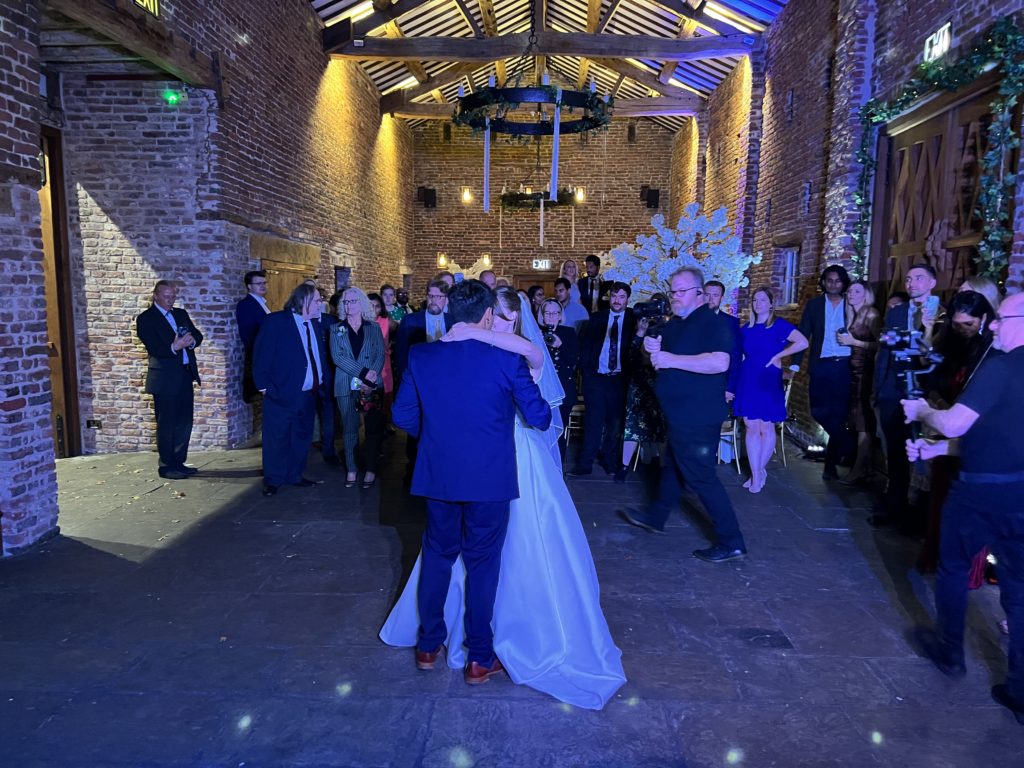 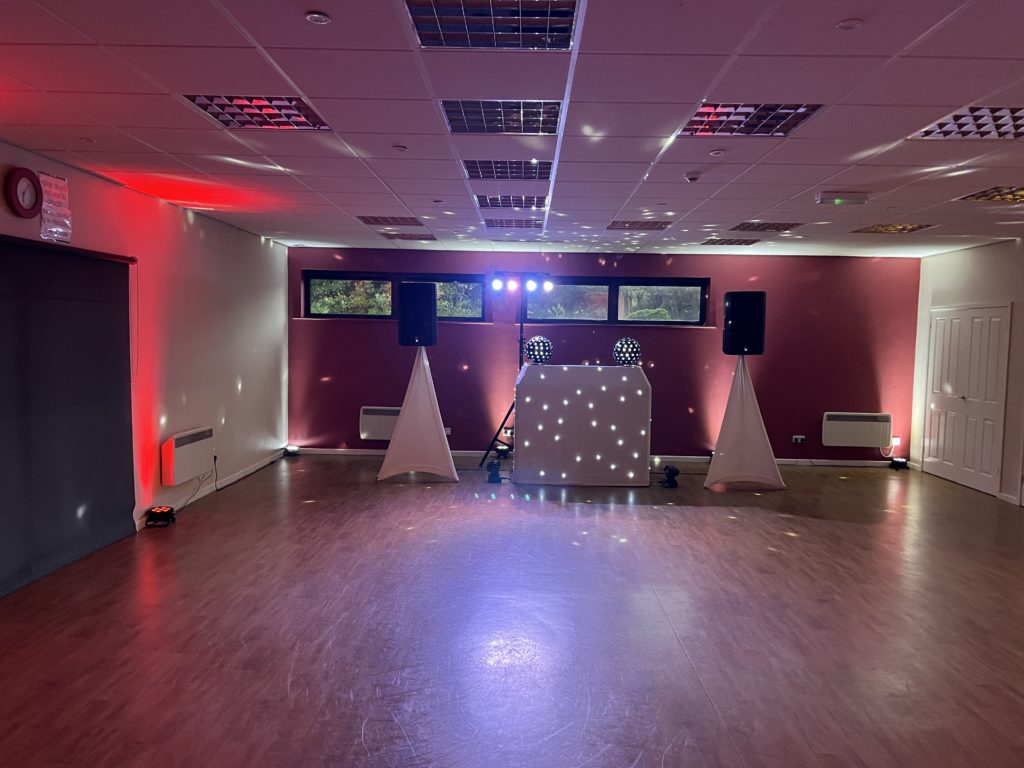 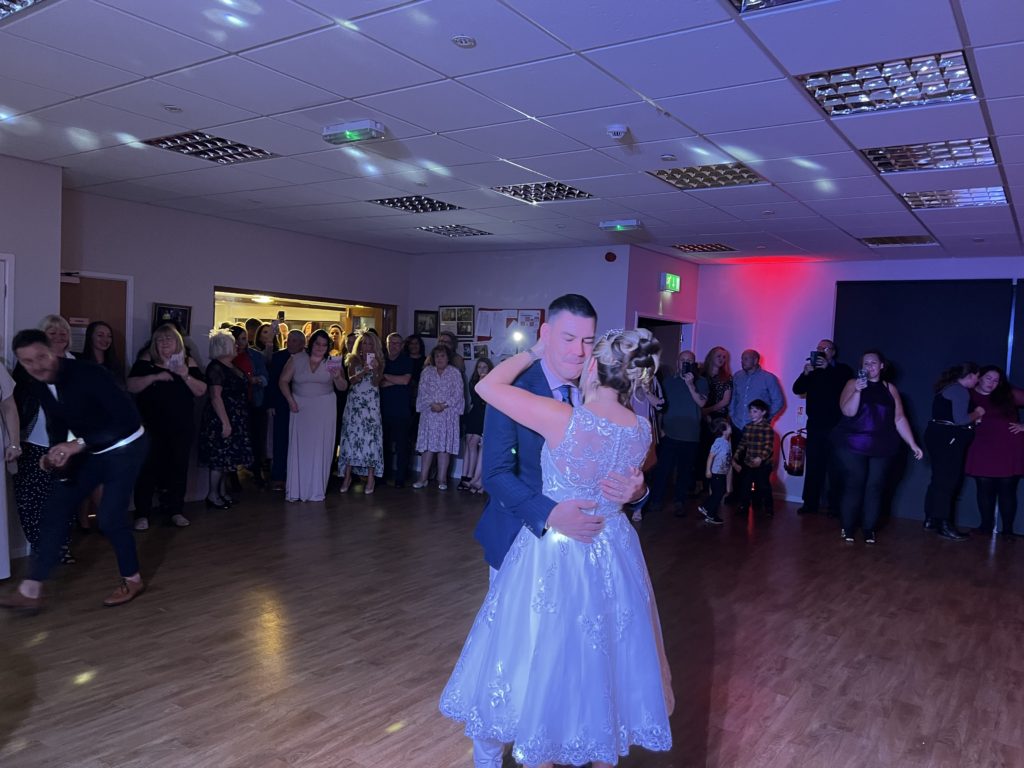 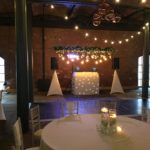 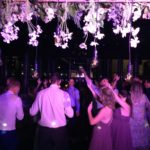 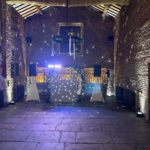 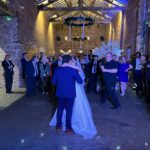 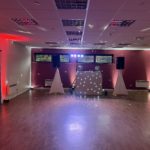 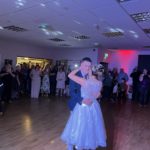 Starting in 1997, Glynn spent six years as a Party Bar/Club DJ before going onto a holiday camp where he was Entertainment Manager for three years. In 2005, he returned to working as a club DJ before becoming a full time mobile DJ in 2008.

Now in his twelfth year as a full time mobile DJ, Glynn is a specialist Wedding DJ and Corporate Event DJ who is equally at home covering Birthdays, Anniversaries and many other special occasions.

With an established background in the entertainment business and a CV with includes event management, local radio and television work along with his performances as a Wedding and party DJ.

His work has featured all types of venues from nightclubs to shopping centres and at all types of events from Weddings and major Corporate Events to School Proms and Race Nights.

With his experience, working across the UK, he has the brilliant ability to judge the right style of music and create a great atmosphere by combining all genres of music with an outstanding professional clear microphone technique, which ensures his work is of the finest quality around and I continue receive outstanding reviews and repeat work from previous clients.

Through his work and training for radio, television and outside broadcasting, Glynn is a very confident public speaker so you can be assured that you are getting the very best when it comes to any important announcements.

Having built a music collection covering all genres, with thousands upon thousands of songs, from the 1940s right up to the current chart and forthcoming releases, Glynn will have something for everyone at your event.

He has worked in all types of environments from large scale night clubs and corporate events to holiday camps and children’s parties and prides himself on being able to choose music for all different occasions and situations as well as taking on board your tastes in music.

Glynn’s DJ career started in 1997 working as a trainee at a north Wales night club before establishing himself as a resident within a month.

By picking up tips and ideas from leading DJs, his work thrived and with the residency becoming one of the leading night clubs in Wales, Glynn scooped a double Welsh Music Award for best pre-club event and best small club venue in 2000.

During this time, Glynn established himself as a lead DJ on community radio station going from overnights to daytime presenting within a two weeks.

With his radio and experience, he was very sort after and spent a couple of years with DJ guest spots at nightclubs around the north west and United Kingdom.

After spending two years on the road DJ-ing at various locations around the UK as a guest DJ, Glynn was offered a new challenge as an Entertainment Manager at a holiday camp. This opportunity allowed him to gain new experiences in a new environment where he would be able to learn valuable managerial and event planning experience.

This change of roles was in sharp contrast to the 90s ‘club scene’ but allowed him to broaden his scope on the different tastes in music and entertainment people wished to have gaining valuable experience over a three year period.

Music knowledge and people skills are key to being able to be a successful Wedding and Corporate DJ and this experience has been crucial for Glynn’s career.

In 2005, Glynn returned to working within nightclubs to help establish a new venue, a challenge which allowed him to bring the knowledge acquired as an Entertainment Manager and assist with promotional business advertising.

After four years at the club, he decided to put my family first as, with the change to licencing on bar and club opening times, working until 4am or 6am did not seem fair on his family.

Having worked at major nightclubs, as a Wedding and Event DJ, in entertainment management and in the media, Glynn has established himself as a leading mobile DJ in Southport and the North West and ensures that he use top of the range equipment for both sound and light at all events to give your occasion the WOW-factor.

From high quality sound to controlled lighting such as spot-lighting for a first dance and colour co-ordinated effects – I offer a service than cannot be rivalled for quality and professionalism.

He has covered many large scale events including Sportsman’s Dinners and Award Ceremonies working alongside star names including the late Bernard Manning and Howard Kendal and Everton FC legends Graeme Sharp and Kevin Radcliffe.

These events include World Cheer Coalition (ICC) British National Finals at Nottingham’s CarPoint Arena and their Northern Cheer and Dance Championships in Blackpool.

Glynn has have covered ‘Le Classique de Danse’, a prestigious awards ceremony covering all aspects of dance from ballroom to theatre, for five years from 2014 to 2018.

Glynn has worked as a DJ for The National Association of Head Teachers’ Annual Dinner and Dance since 2015 at various venues including the Royal Clifton and Ramada Plaza in Southport and MacDonald New Blossoms Hotel in Chester.

Due to other commitments, Glynn will not be at WorldNET 2018 – Europe’s Largest Football Supporters’ Tournament. Glynn has previously covered the last four events in Preston and Nottingham providing outdoor PA and will look to return for the 2019.

During his career, Glynn has also worked alongside headlining singers and bands including The Informers, Tommy Barron and Pretty Girl Rock along with numerous official tribute acts to artistes such as Bruno Mars, Olly Murs, Take That, Robbie Williams, Kylie Minogue and Tom Jones.

For charity, Glynn has represented Rock FM as part of their Cash For Kids charity campaign by hosting a 12-hour marathon DJ session in 2013 and, in all, his charity work at events has seen me help to raise in excess of £100,000 for local and national good causes including Clic Sargent, Queenscourt Hospice, Cancer Research, Zoe’s Place, MacMillan Cancer and Liverpool Royal Hospital.

All of Glynn’s DJ equipment is fully PAT Tested and he has Public Liability Insurance of up to £10million.